"One Woman’s War (Da)" is autobiography and an oral history of the 8 year Iraqi, first appeared in September 2008. This is the oral histories of Iranian women in the Iran-Iraq war. This is the record of Zahra Hoseyni’s interviews with A zam Hoseyni while Kurdish families took refuge in Iran after being expelled from their home. Many readers see Da as an epic of grief.

There are three parts of this book. The first part tells about the author’s life: about her childhood in Iraq, about the immigration of her family to Iran, and about their struggle to life in Khorramshahr (a port city on the Persian Gulf). 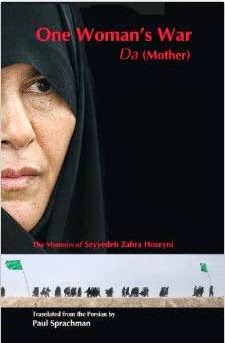 The second part is the largest part. This part tells about Zahra Hoseyni s experiences as a nurse to wounded civilians and soldiers during the first three weeks of the Iran-Iraq War (September 22 October 13, 1980). Her role is collecting of body parts and washer of corpses. She is also as a combatant in the defense of Khorramshahr. Above all his role as Da (mother in Kurdish)

The third part tells about her recovery from shrapnel wounds. She got wounded on the battlefield. This part also tells about her married life. She spends in two homes: in an urban apartment house (central Tehran) and another one in a suburban area of southwestern Iran.

Now this book has been translated into English by Professor Paul Sprachman from Rutgers University. This book is also translated into Urdu and Turkish. Now the international people can read this book. This is available now on Amazon.

If you require any more information or have any questions about our site's disclaimer, please feel free to contact us by email at bisnissun@gmail.com.

All the information on this website is published in good faith and for general information purpose only. www.ladangcerita.com/ does not make any warranties about the completeness, reliability and accuracy of this information. Any action you take upon the information you find on this website (www.ladangcerita.com/), is strictly at your own risk. www.ladangcerita.com/ will not be liable for any losses and/or damages in connection with the use of our website.
From our website, you can visit other websites by following hyperlinks to such external sites. While we strive to provide only quality links to useful and ethical websites, we have no control over the content and nature of these sites. These links to other websites do not imply a recommendation for all the content found on these sites. Site owners and content may change without notice and may occur before we have the opportunity to remove a link which may have gone 'bad'.
Please be also aware that when you leave our website, other sites may have different privacy policies and terms which are beyond our control. Please be sure to check the Privacy Policies of these sites as well as their "Terms of Service" before engaging in any business or uploading any information.

This site disclaimer was last updated on: Saturday, March 30th, 2019
· Should we update, amend or make any changes to this document, those changes will be prominently posted here.